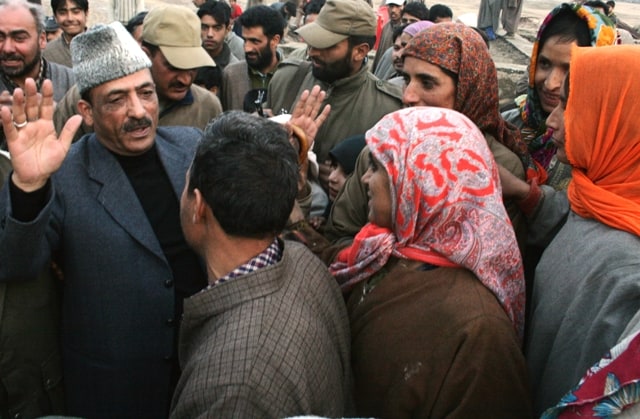 Srinagar: Stating that the trust reposed in Peoples Democratic Party (PDP) during the last three phases of election has thrown a serious challenge ahead, Syed Mohammad Altaf Bukhari, PDP candidate from Amirakadal constituency on Wednesday said the party will reciprocate the faith of people with an inclusive growth and an atmosphere of amity and mutual trust.
Addressing an impressive public convention at Mehjoor Nagar on Wednesday, Bukhari said the massive public support in favour of PDP is a result of a unique model of governance demonstrated by the party during its brief period of power in 2002.
Under the leadership of Mufti Mohammad Sayeed, Bukhari said, PDP had proved how to implement an agenda of peace and development simultaneously, without compromising on each other’s significance. He remarked that having emerged as a strong regional force within a short span of time; the PDP is committed to take forward the state to the new horizons of peace and prosperity in coming years.
“Transparency, accountability and the probity in the administration besides facilitating a conducive atmosphere for cordial relations between the two estranged neighbors-India and Pakistan was the hallmark of a clean and pro people government led by Mufti Mohammad Sayeed,” Bukhari stressed.
The PDP candidate for Amirakadal constituency said that he will try his best to address the issues facing the people particularly the youth of Amirakadal constituency which has been sofar neglected by the National Conference regime. “It is my conviction and the commitment that you will never feel let down or repent to have casted your vote in my favour. I will put in all efforts to make this constituency a model constituency with almost all modern facilities at the disposal of its inhabitants,” Bukhari pledged, amid huge applauds from the audience.
He said Amirakadal constituency deserves the best sanitation, road connectivity, healthcare, deep drainage system, scientific disposal of solid wastes, schooling facilities, network of street lights and the recreation facilities for the children and the youth. “During the past over two decades and particularly in last six years, development in Amirakadal seems to have been a least priority for its representatives. The so called leaders, whom you elected to Assembly, took you at a ride. Not only their doors remained closed for you but they had turned a blind eye towards your miseries and pain,” Bukhari observed.
On this occasion, senior PDP leader and former minister Mohammad Dilawar Mir addressed the convention. In his address, Mir said that under NC-Congress coalition, the development in Jammu and Kashmir witnessed a huge setback. He said no significant infrastructure was raised in the state during last six years. “The devastating floods have added to this massive challenge ahead for the PDP. Our party has to start reconstruction and rebuilding of the whole city particularly Amirakadal constituency which was hit the most,” Mir stressed.
The former PDP general secretary observed that Omar Abdullah has failed to deliver as the chief minister of a sensitive state like Jammu and Kashmir. “Not only the Kashmir witnessed an unabated blood bath but the development also got stalled and the unemployment touched new scales under his rule. We have come here to seek your support to change this situation and I assure you that PDP has given you the right candidate who has the ability to change the scenario,” Mir added.
The convention was also addressed by Naeem Akhter, MLC and party’s chief spokesperson. Akhter said the last three phases of election have indicated that National Conference and Congress have been pushed to oblivion due to their inept governance, rampant corruption, nepotism and malpractices.
The PDP chief spokesman observed that while National Conference has traded Jammu and Kashmir constitutional position, its natural resources and the people’s aspirations for the power; Congress has been a involved in corruption, land grabbing, scams, scandals and Afzal Guroo’s out of turn hanging. He said because of the administrative inertia, political ineptitude and above all the lack of direction, the National Conference-Congress coalition failed to deliver and became a burden on the state exchequer in last six years of their rule.
Terming Amirakadal a constituency as the heart of the City, Akhtar said during last six years rule, this heart has been craving for government attention but NC-Congress like always have never paid a heed to the miseries of its inhabitants. “The construction of Jehangir Chowk-Natipora flyover is going on a snail’s pace and the lack of planning has resulted in a traffic mess in the area. Similarly in all other areas of basic amenities, the government has neglected this prime constituency which should have by now emerged as a model constituency in the entire state,” Akhtar remarked.
Abdul Hamid Kosheen, PDP state coordinator, Haji Parvez Ahmad party district coordinator, Anjum Fazili State coordinator women’s wing, Haji Ali Mohammad Bagaw, Asif Noor, Shuja Sarwar and Gh Ahmad Dagga also addressed the convention.