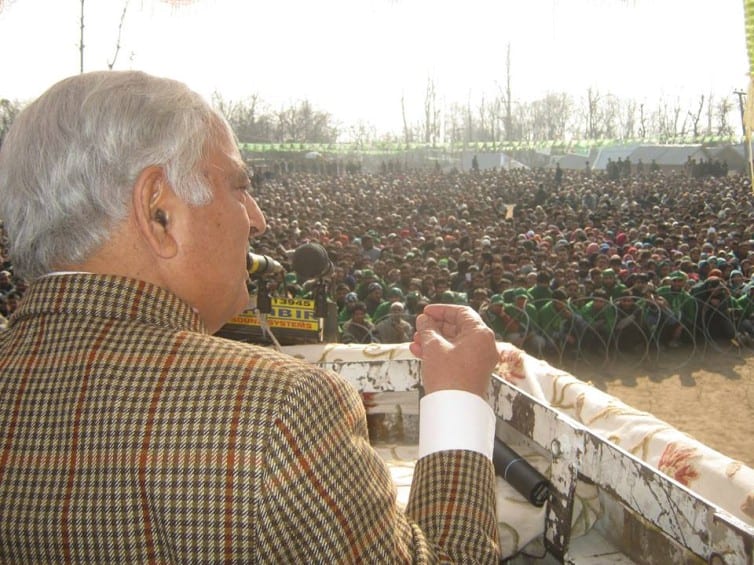 Srinagar: Complimenting people for their maturity and wisdom displayed in this election, Peoples Democratic Party patron Mufti Muhammad Sayeed Tuesday said that Jammu and Kashmir is sending out a load and clear message that it wants the problems facing the state resolved through democratic process.
“The maturity shown by the electorates during the ongoing polls has made it clear that there is an urge to establish a system of transparency, accountability and uniformity under the banner of PDP”, he said adding that the people have this time used the platform not only for changing the government and the existing system but to achieve wider political and economic objectives.
Asserting that all efforts to cause division of votes in Jammu and Kashmir have been defeated, Mufti said that the credit goes to electorate who understood that at this crucial juncture they need to use the power of vote to defeat the forces which wanted to sow the seed of discord, division and communal polarization.
Expressing satisfaction at the successful and smooth conduct of the third phase of polls, like earlier two phases, the PDP patron congratulated Election Commission, administration and police for their impartial conduct. “Conduct of impartial polls add to the credibility of such institutions and strengthen the democratic process”, he said.
“Jammu and Kashmir is sending out a loud and clear massage not only to the divisive forces but also that it wants the problems facing the state resolved through democratic process”, Mufti said while addressing a public meeting at Khiram in Bijbehara constituency. He was accompanied by the party candidate from the constituency AR Veeri.
Elections or participation in them, he said, is not denial of the problems in Jammu and Kashmir but it is an assertion that issues being faced by the people have to be resolved through democratic process. “The participation of the people in this process has posed a challenge to the country’s political setup to respond to the urge for peace, dignity and development in Jammu and Kashmir. Irrespective of ideologies the political setup now is required to respond in the same manner and with same enthusiasm to ensure issues of the people are understood, deliberated and resolved”, he said.
The PDP patron said that his party is committed to establish a system of transparency and accountability. “Being in power has never been my objective. I have many times sacrificed the power for the interest of people and state and my party is committed to bring equality, justice, development, prosperity and economic upliftment so as to lay a foundation of new era in Jammu and Kashmir”.
He recalled that after 2002 elections he was in no hurry to take over the reign of power after Congress extended support and desired that PDP should lead the coalition government. “We ensured that the coalition is based on our policies and programmes which were put on papers in the form of Common Minimum Programme”, he said adding that even though it was NDA government in centre the promises made to the people were fulfilled and historic measures were taken to restore peace and dignity of people in the state.
He said the PDP was again this time seeking a positive vote on its progressive agenda to facilitate the resolution of critical political and economic problems confronting the state.
“Substantial endorsement of the PDP’s political, economic and development agenda by the people is the greatest achievement for the party,” he said.
“If PDP is leading the democratic movement for change in J&K today, it is because it has earned credibility among the masses by not only articulating their aspirations in a responsive and responsible manner, but also by delivering on the development front,” he added.
Addressing the gathering the local party candidate AR Veeri said that PDP is seeking decisive mandate to veer of the state from the crises it has been plunged in by the National Conference and Congress coalition. “Our party was able to bring out a considerable and meaningful change on ground after it took over the reign of power in 2002 due to the its people friendly policies”, he said adding that it was unfortunate that the confusion and chaos returned the state again after NC came to power in 2008 reversing all the progress made on political, economic and developmental fronts.