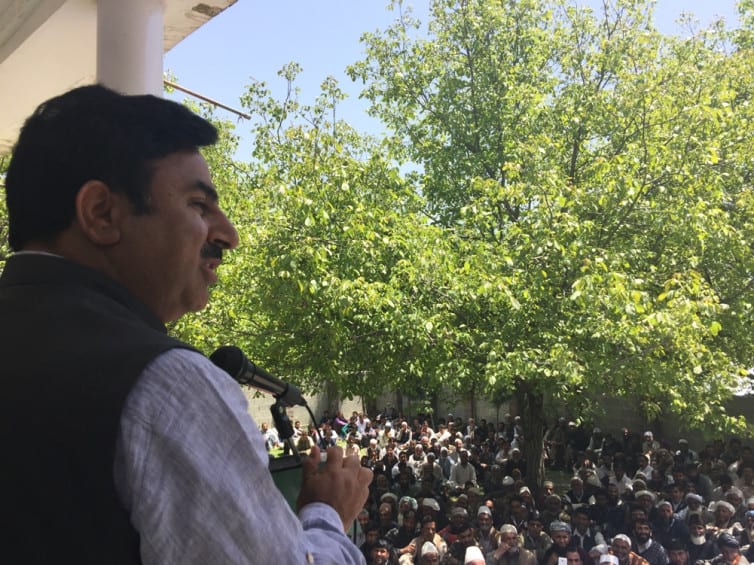 Shangus: Senior PDP leader and former MLA Shangus Peerzada Mansoor Hussain today asked congress and National Conference to go for a serious introspection before giving sermons on good governance and the development.
Addressing a day-long convention attended by hundreds of party workers and delegates at Rakh-e-Brah in Shangus, Mansoor said it is the previous government headed by National Conference that is responsible for liability to the tune of Rs 9500 crore which has rendered treasuries dry thus affecting serving and retired employees as well as the contractors who are presently facing a tough time.
He said PDP-BJP coalition came into existence only after hectic deliberations which are aimed at major transformation within the system of governance by weeding out rusty work culture, corruption and maladministration. “The only thing NC-Congress did in their tenure was promoting corruption, misgovernance and financial mess,” Mansoor said adding that the PDP led government has put all its efforts to take Jammu and Kashmir out of the precarious financial situation inherited from the previous government.
The former MLA Shangus said that PDP is committed to work for political and economic stability of the state it is the matter of time when the new culture of probity would percolate down to the grassroots level and the people will feel a difference. “The responsibilities of the present Government led by PDP are much higher as the previous dispensation led by NC has done tremendous damages to state’s economy which was coupled by the last year’s devastating deluge,” Mansoor said while assuring the party workers and delegates that people will surely feel a change on the ground with the initiatives being taken by the PDP government.
The PDP senior leader observed that various landmark initiatives are in the pipeline on the developmental front and people will see a massive revamp in all important departments and sectors concerned with the peoples’ empowerment.
Addressing the convention, Waheed-ur-Rehman Parra, State President PDP youth wing said that the youth has been the worst victim of Kashmir conflict and National Conference has not only been responsible for their plight but its anti youth policies had become a hallmark of its governance during last six years. He said that it was heartening to see youth of the state are impressed with the PDP agenda and are now aligning with it.
Parra said that the youth are a priority for PDP led government and all efforts are on to create a conducive atmosphere for their welfare. “The PDP is pursuing an agenda of hope and youth are the focus of its policies,” Parra remarked, adding that the youth of Jammu and Kashmir are among the best and they deserve the best. “We are abreast with the mounting unemployment problem and the lack of job avenues in private sector. But under the leadership of Chief Minister Mufti Mohammad Sayeed sahib our party is trying hard to explore possibilities wherein the unemployed youth will be absorbed both in government as well as in entrepreneurial sector on fast track basis,” Parra averred. On this occasion, the party leaders started a membership drive.